By 1890, the once great wild North American bison herds, which had at one point numbered in the tens of millions, were all but extinguished. Within a single human lifetime of slaughter,  less than a thousand individuals were left, scattered across North America in small pockets. A few wild bison remained in areas which became national parks: plains bison in Yellowstone (1872) and wood bison in Wood Buffalo (1922). Most of the remaining stragglers elsewhere were soon after hunted down or captured by ranchers.

In the 1870s, during one of the last great buffalo hunts in Montana, a First Nations man named Samuel Walking Coyote captured and raised about four orphaned calves after they followed his horse home. After his herd had grown to about thirteen head, he sold them to two Métis men: Charles Allard and Michel Pablo. Pablo and Allard raised these animals over the next few decades, bolstering their stock with animals from other sources such as Charles “Buffalo” Jones. But by the turn of the century, Pablo (Allard had since died) lost the right to graze his bison on the Flathead reservation land where they’d been flourishing because the American government decided to open up native reserve land in the area for white settlement.

Pablo offered to sell his bison – a symbol of the American West – to Teddy Roosevelt’s government, but they vacillated and couldn’t commit. Some say Pablo felt personally insulted and when the Canadian government agreed to buy his bison he went out of his way to ensure that every last animal possible would be sent north above the Medicine Line (the 49th parallel) to Canada.

The roundup was to be no easy task.

Pablo had underestimated the number of bison that he actually grazed: instead of perhaps 300, he had over 700. The bison were temporarily housed at Elk Island National Park from 1907-1909, because the fences at the newly-created (and ill-fated) Buffalo National Park, were not completed until 1909. But those are stories for another time. Rounding up all of Pablo’s bison took far more than the one summer they had planned, but due to the tenacity of the cowboys on horseback working over the course of nearly five years over rugged terrain with the largest and wildest of remaining bison herds, and the significant financial investment Pablo made in wooden corrals and specialized, reinforced train cars, Pablo succeeded in his goal.

These roundups were by no means safe. Like their descendants, these bison were wild and objected to being moved about. The Wainwright Star recounts the dramatic story of a photographer who was nearly trampled to death during one of the roundups in Montana:

“The entry of the buffalo into the corral came nearly being accompanied by a regrettable fatality. Mr. Forsyth, an enterprising photographer from Butte, Mont., being anxious to get some photos of the animals in the water, had stationed himself at a point of vantage amidst a clump of trees close to one of the booms in the river where he judged he would be out of path of the oncoming herd. However they chose to take the bank directly below where he was standing, and before he could reach safety they were upon him in a mad, irresistible stampede. How he escaped being trampled to instant death is a miracle which even he cannot realize. He has a recollection of the herd rushing upon him and of having in some way clutched a passing calf which he clung to until it passed under a tree. He then managed to grasp a branch and although he was unable to pull himself up out of danger he was able to keep himself from under the feet of the plunging herd. His dangling legs were bruised and cut by their horns and his clothes were torn to shreds, but he still clung to the limb for life. Twice the herd passed under him as they circled back in an attempt to escape, but fortunately before he became exhausted they rushed into the corral. The Canadian Pacific officials and the riders who knew the location chosen by Forsythe shuddered when they saw the animals rush in there and expected to find his body trampled out of semblance in the clay. Consequently they were rejoiced to find the luckless photographer slightly disfigured, but still hugging his friend the tree in his dishevelled wardrobe. His two costly cameras were trampled to pieces and his opinion of his predicament was summed up in the words, ‘I have had enough buffalo.’” (emphasis added)
Source: Wainwright Star, January 8, 1909, Page 1, Item Ar00104, at Peel’s Prairie Provinces.

Bison are still rounded-up today. For the past century, Elk Island National Park has actively handled bison for disease control, population reduction (earlier through culling and now through transfers), and sample taking for academic study. It is no easy task. Last week, I had the amazing opportunity to help with the roundup of wood bison: the largest land mammals in North America. After over a century of work, the conservation of plains and wood bison continues today. 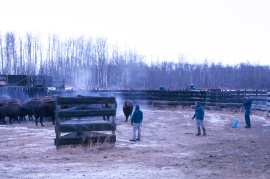 Splitting the bison herd into a more manageable number of individuals to run through the squeeze. Photo courtesy of Scott Mair. 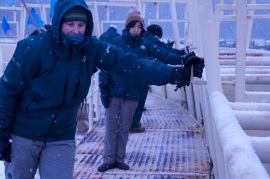 At the ready at the single chutes, waiting for a bison to come through so we can close the gates behind them. Photo by Scott Mair. 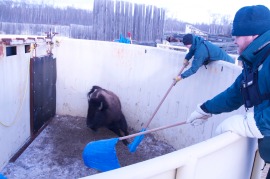 At the single chutes. (There I am!) Photo by Scott Mair. 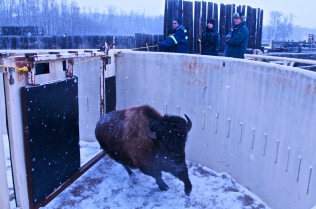 Wood bison in the handling pen. Photo by Scott Mair. 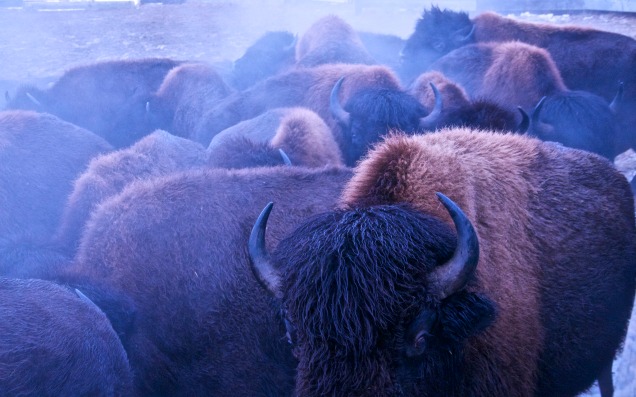 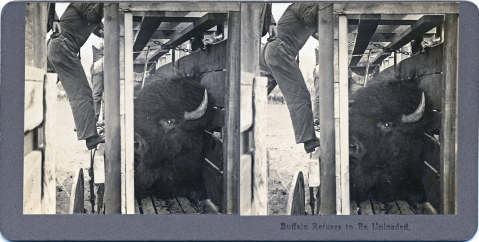 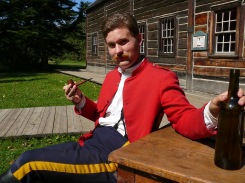 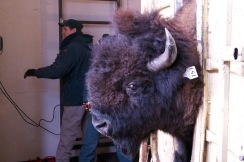 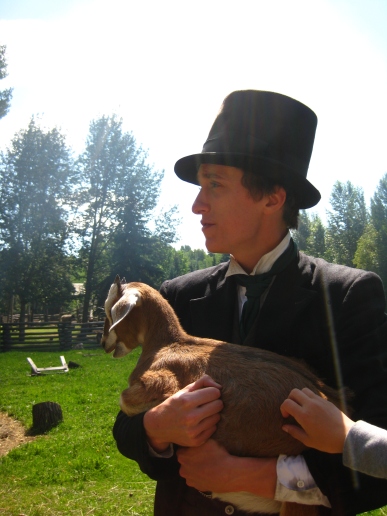 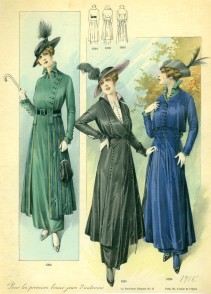 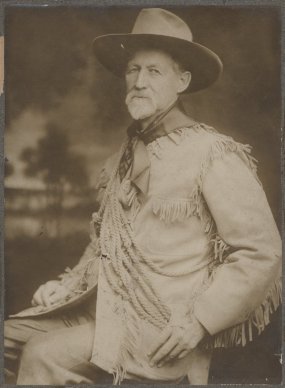