Last weekend, I had the great pleasure of attending the grand re-opening of Elk Island National Park’s new Visitor Centre. It was so amazing to see the space re-imagined! Previously it was a pair of pokey buildings joined together by a dark archway. Its bathrooms had ancient brown tiles that looked dirty and dusty even when freshly cleaned, and the visitor centre had only small tinted windows that looked dark and closed. The whole thing also looked a lot like a maintenance shed; there wasn’t a real sense of arrival for new visitors. In great contrast, this newly renovated building is light and airy with an exhibit space as well as an information counter, water bottle filling station, and retail space… and a separate brand new set of gender-neutral bathrooms. (You have to address Maslow’s hierarchy of needs! You can’t underestimate the value of clean and modern bathrooms to visitor experience!)

So much thought was put in to think about this space from a staff member’s perspective (to be a positive, safe, and useful place to work) as well as a visitor’s perspective. You’ll notice some excellent displays that answer some of the most common questions asked by visitors, including stuff about visitor safety (particularly how to safely observe bison) and where the bison are. The trail map on the wall behind the info desk has something new: a heat map drawn from GPS collar data from the last several years that show where bison hang out in the park most often. Staff can also draw on the map with dry-erase marker! I think that’ll get a lot of good use. I think this space head some common questions and issues off at the pass, and will be a friendly, welcoming, and informative space that’ll set the tone for one’s visit. 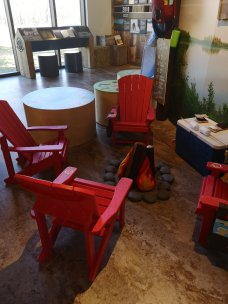 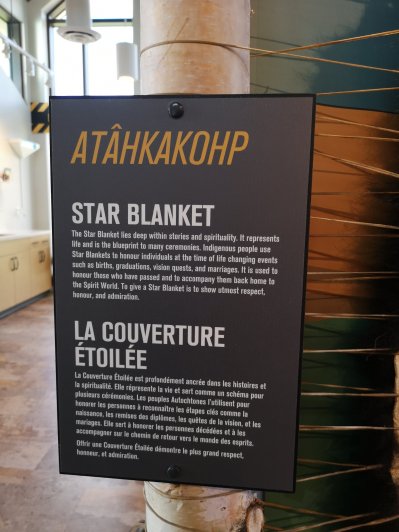 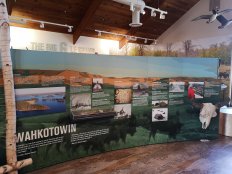 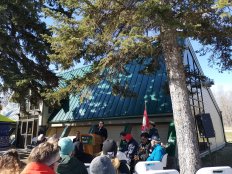 I understand that Elk Island worked closely with local Cree First Nations as well as Metis groups to create some of the displays. The park also worked with a group of incarcerated Indigenous women who are part of a program to gain training and job skills while at the Edmonton Institution. Among other projects at Elk Island, the women created the star blanket (made traditionally on bison hide) that is the first thing visitor see when entering the building.

Cree Elder Melaine Campiou gifted the visitor centre the name Wahkotowin, which refers to the relationship with the land and all that live on it.

I congratulate my friends and colleagues at Elk Island, particularly Kat and Cam, for all the work they’ve done carrying this project through to completion! Kat marshaled a lot of folks with separate skills, knowledge, and expertise, to finish a wonderful project. I was involved tangentially in some of the initial research and visioning of the exhibit, plus sourced some of the images and did a quick review of the French text for accuracy. It’s amazing to see the space fully realized in person, instead of in a draft design PDF! I definitely excitedly pointed out a few historical images to my mum. 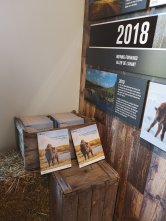 The other exciting thing for me was to see copies of my book, Through the Storm: Canada’s Bison Conservation Story* in the flesh! They were literally hot off the press, having arrived at the park the week before. It was absolutely thrilling to see them there – and to see them being purchased! I autographed a few copies, including one for a well-respected bison expert and friend Wes Olson. I also got to ask the question “Who shall I make this out to?” for the very first time.

I had to round out my visit by heading out onto the landscape spoken of in the displays. After all, the new Visitor’s Centre is meant to be only the gateway to the park experience! My mother and I hiked out into the Bison Loop on foot. It was the early afternoon (not “bison o’clock”) so as anticipated they weren’t visible from the roadway. We spotted a lot of bison signs, including the scattered bones of a bull bison. In the end, we watched a group of cow bison hanging out at the treeline over the rise: one of their favourite spots. An excellent way to end our visit!

* You can read a free digital copy of my book on Elk Island’s website. We ended up changing the title of the print edition because at the last instant we uncovered a small print run of books on bison from the 1990s with a title that was too similar. We’ll be changing the title on the website soon. Only the cover, effectively, will change, so in the meantime you can still learn all about the history of bison conservation in Canada, and admire many archival and modern images of bison. Of course you can pick up a print copy of the book in either French or English at Elk Island’s new visitor centre! 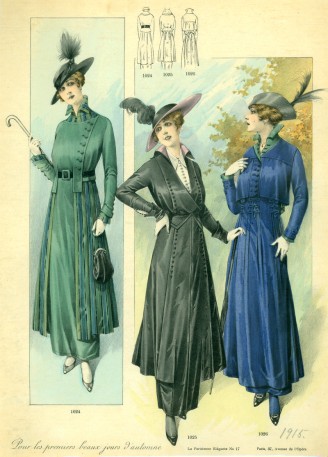 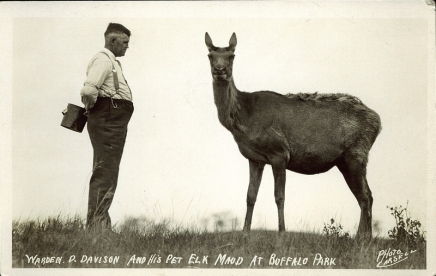 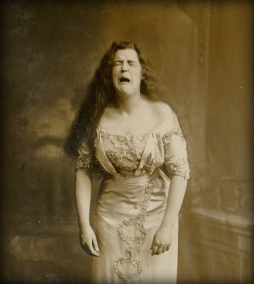 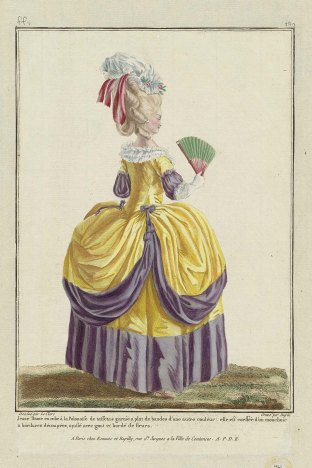